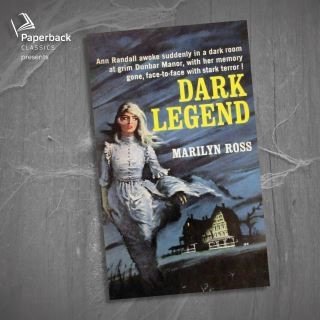 The Dark Legend of Dunbar Manor terrified Ann Randall.  How long could she endure its horrifying attacks on her sanity - and her life?

Dunbar Manor had always been a place of fear for Ann Randall.  Years ago her mother had been killed there by a black-hooded figure who escaped capture.  There were those who said that the phantom-like "thing" still roamed the eerie grounds at the dark of the moon.

Ann had never expected to return to Dunbar Manor.  But one night she awoke in one of its shadowy rooms, her money gone, to find herself the fiancee of a sinister man she had never seen before!  She was informed that soon she would become the mistress of the great estate.

Struggling to remember her lost past, Ann realized that she might never live long enough to reign at Dunbar Manor.  For the evil being that took her mother's life began stalking her.....And unless she escaped, she would surely be the next victim of Dunbar Manor's DARK LEGEND!

Marilyn Ross: Marilyn Ross is the pseudonym for William Edward Daniel “W.E.D.” Ross (November 16, 1912 - November 1, 1995) was a Canadian actor, playwright and bestselling writer of more than 300 novels in a variety of genres. He was known for the speed of his writing and was by some estimates the most prolific Canadian author ever, though he did not take up fiction until middle age.
He wrote popular romances and gothic fiction as W. E. D. Ross and Dan Ross and under a variety of mostly female pseudonyms. As Marilyn Ross, he wrote popular gothic fiction including a series of novels about the tormented vampire, Barnabas Collins, based on the American TV series Dark Shadows (1966–71). His second wife, Marilyn, served as first reader of his works, and "Marilyn Ross" was one of his favorite pseudonyms.