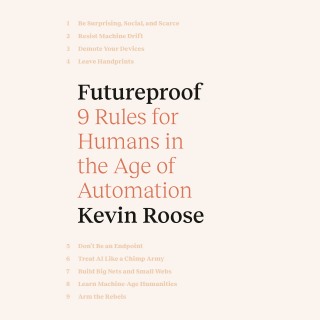 9 Rules for Humans in the Age of Automation

“While we need to rewrite the rules of the twenty-first-century economy, Kevin’s book is a great look at how people can do this on a personal level to always put humanity first.”—Andrew Yang

“A clear, compelling strategy for surviving the next wave of technology with our jobs—and souls—intact.”—Charles Duhigg, author of The Power of Habit

The machines are here. After decades of sci-fi fantasies and hype, artificial intelligence has leapt out of research labs and Silicon Valley engineering departments and into the center of our lives. Algorithms shape everything around us, from the news we see to the products we buy and the relationships we form. And while the debate over whether or not automation will destroy jobs rages on, a much more important question is being ignored:

What does it mean to be a human in a world that is increasingly built by and for machines?

In Futureproof: 9 Rules for Humans in the Age of Automation, New York Times technology columnist Kevin Roose lays out a hopeful, pragmatic vision of how people can succeed in the machine age by making themselves irreplaceably human. He shares the secrets of people and organizations that have survived technological change, and explains how we can protect our own futures, with lessons like

• Do work that is surprising, social, and scarce (the types of work machines can’t do).
• Demote your phone.
• Work near other people.
• Treat A.I. like an army of chimpanzees.
• Add more friction to your life.

Roose rejects the conventional wisdom that in order to compete with machines, we have to become more like them—hyper-efficient, data-driven, code-writing workhorses. Instead, he says, we should let machines be machines, and focus on doing the kinds of creative, inspiring, and meaningful things only humans can do.


* This audiobook edition includes a downloadable PDF that contains the Appendix and Reading List from the book.

Kevin Roose: Kevin Roose is a technology columnist for The New York Times. His column, “The Shift,” examines the intersection of tech, business, and culture. He is the host of the Rabbit Hole podcast, and a regular guest on The Daily. He writes and speaks frequently about topics including including automation and AI, social media, disinformation and cybersecurity, and digital wellness. Previously, he was a writer at New York magazine and the co–executive producer of Real Future, a documentary TV series about technology. He is the New York Times bestselling author of two previous books, Young Money and The Unlikely Disciple. He lives in Oakland, California.